CAUSES AND EFFECTS OF OVER VOLTAGES IN POWER SYSTEM 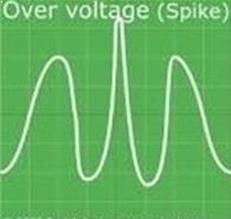 Over voltages are caused on power systems due to external and internal influencing factors. The voltage stress caused by over voltage can damage the lines and equipment’s connected to the system. Over voltages arising on a system   can be generally classified into two main categories as below:

This type of over voltages originates from atmospheric disturbances, mainly due to lightning. This takes the form of a surge and has no direct relationship with the operating voltage of the line. It may be due to any of the following causes:

These over voltages are caused by changes in the operating conditions of the power system. These can be divided   into two groups as below:

1. Switching over voltages or Transient over operation voltages of high frequency:

This is caused when switching operation is carried   out under normal conditions or when fault occurs in the network.   When an unloaded long line is charged, due to Ferranti Effect the receiving end voltage is increased considerably resulting in over voltage in the system.  Similarly when the primary side of the transformers or reactors is switched on, over voltage of transient nature occurs.

These are caused when some major load gets disconnected from the long line under normal or steady state condition.

EFFECTS OF OVER VOLTAGES ON POWER SYSTEMS

Over voltage tends to stress the insulation of the electrical equipment’s and likely to cause damage to them when it frequently occurs. Over voltage caused by surges can result in spark over and flash over between phase and ground at the weakest point in the network, breakdown of gaseous/solid/ liquid insulation, failure of transformers and rotating machines.