In mechanical device energy converters the rotor conductors decrease the actual field flux; this could be armature reaction at a basic level. To know it in a very deeper level we'd like to use some diagram initially. Simply can say the effect of armature flux on the main field flux is called armature reaction.
Now here 3 diagrams are shown.
In figure (a) there's no current flow through the rotor conductors and also the flux from the N pole to S pole is uninterrupted and straight.

When current goes through the rotor conductors, there's a flux generation that is inevitable. Currently this rotor flux put with the most flux and thereby heavy the natural flow of the main field flux, that is shown in figure (b) 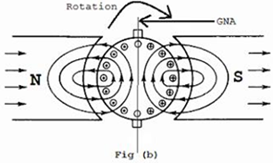 Now, once these 2 flux move there's a resultant flux generated that tilts the geometric neutral axis (GNA) and there's new axis for the flow of resultant flux, which is shown in figure(c). 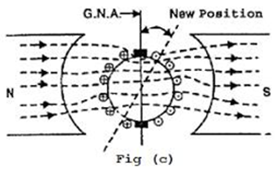 Share your Experience with us by commenting below and then make sure you subscribe to our regular Email Updates!