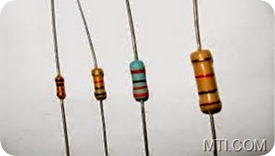 Resistor is required minimum time to introduce resistivity in numerous circuits to limit the current through it. Resistor is a part of circuit which does the same. Like series connected resistor limits the electrical current flowing through the Light emitting diode (LED). Additionally to it resistors serve several alternative functions in electrical and electronic applications.

From the above equation it is clear that for restraining P, V must be limited for a specific resistor of resistance R. This V is voltage rating of resistor of power rating P watts and resistance R in Ω.

The resistance of a resistor may possibly also vary sometime with applied voltage across it. This modification is stated as a percentage of the resistance at 10% of rated voltage. Thus the voltage coefficient of resistance is given by