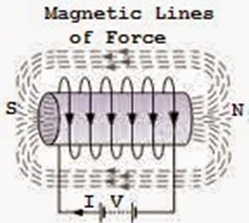 At any time the number of magnetic lines of force linking with a coil / or circuit changes, an e.m.f gets induced in that coil or circuit.

The magnitude of the induced e.m.f is directly proportional to the rate of change of flux linkages.
∴ Flux linkages = Flux x Number of turns of coil

With K as unity to get units of e as volts, dф is change in flux, dt is change in time hence (dф / dt) is rate of change of flux.

Now as per Lenz's law, the induced e.m.f. sets up a current in such a direction so as to oppose the very cause producing it. Mathematically this opposition is expressed by a negative sign.

Thus such an induced e.m.f. is mathematically expressed along with its sign as,
∴  E = -N(dф/dt)  volts