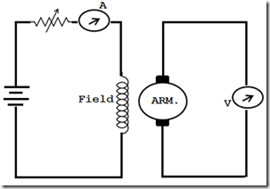 The O.C.C. for a d.c. generator is set as follows. The fig above shows that the field winding of the d.c. generator is cut off from the machine and is separately excited from an external d.c. supply. The generator is allowed to run at constant speed. The Field current (If) is raised from zero in steps and therefore the corresponding values of generated e.m.f. (E0) reads off on a voltmeter connected through the armature winding terminals. The fig shows that the relation between E0 and If, we tend to get the open circuit characteristic. 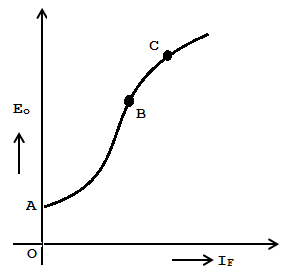 The succeeding points could also be noted from O.C.C.:
The reader could note that the O.C.C. of even self-excited generator is obtained by running it as a separately excited generator.