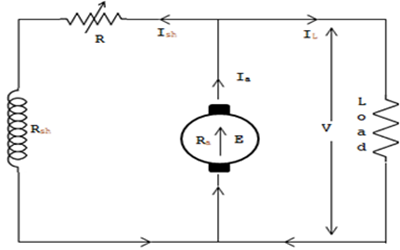 The circuit diagram of a DC shunt wound generator is shown in the above fig. In that the armature current Ia ruptures up into 2 parts; a little fraction shunt current Ish flowing through shunt coil whereas the main part IL goes to the external load.

The fig shows that the open circuit characteristic of a DC shunt generator, which is similar in form to it of a series generator. The line OP signifies the shunt field circuit resistance. Once the generator is run at typical speed, it'll build up a voltage OM. At no-load, the terminal voltage of the generator are going to be constant (= OM) diagrammatical by the horizontal line MR.

The internal characteristic of a shunt Generator is shown in the curve 1. As soon as the generator gets loaded, flux per pole is decreased because of armature reaction. For that reason, e.m.f. E generated on load is a smaller amount than the e.m.f. generated at no load. Thus the internal characteristics curve of shunt generator (E/Ia) drops down slightly as shown in Fig. 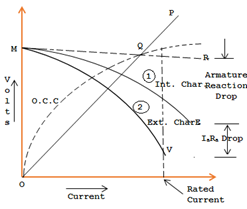 The external characteristic of a shunt generator is shown in curve 2. This curve shows the relation between the terminal voltage V and load current IL.

It should be noted from the external characteristic that change in terminal voltage from no-load to full load is tiny. The terminal voltage will perpetually be maintained constant by adjusting the field resistor R automatically.