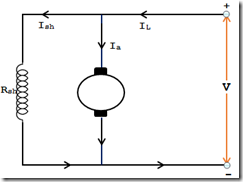 The fig above shows the circuit diagram of shunt motor. In this circuit the field winding is directly connected to the source voltage, so the field current Ish and the flux in a shunt motor are constant.

We know that in a DC Motor Ta ∝ ΦIa. In this the flux Φ is continuous by ignoring the armature reaction, since the motor is working from a continual source voltage. 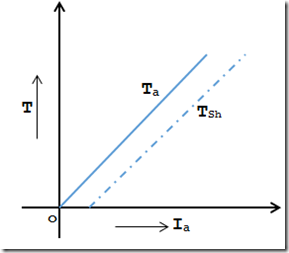 Therefore the curve drawn between torque Vs armature current is a straight line transitory through the origin which is shown in fig. The shaft torque(Tsh) is a smaller amount than armature torque and is shown in the fig by a dotted line. From this curve it is proved that to start a heavy load very large current is requisite. Hence the shunt DC motor should not be started at full load. 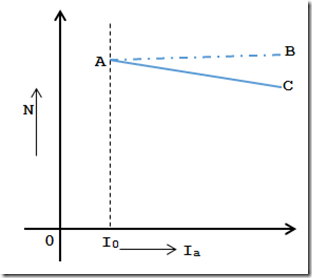 At normal condition the back EMF Eb and Flux Φ both are constant in a DC Shunt motor. Hence the armature current differs and the speed of a DC Shunt motor will continue constant which is shown in the fig (dotted Line AB). Whenever the shunt motor load is increased Eb=V-IaRa and flux reduces as a result drop in the armature resistance and armature reaction. On the other hand, back EMF reduces marginally more than that the speed of the shunt motor decreases to some extent with load. 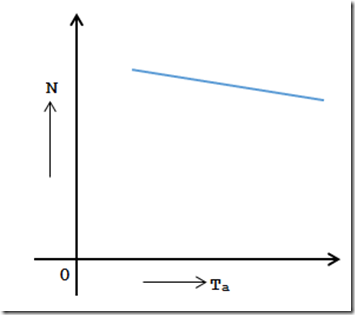 This curve is drawn between the speed of the motor and armature current with various amps as shown in the fig. From the curve it is understood that the speed reduces when the load torque increases.
With the above three characteristic it is clearly understood that when the shunt motor runs from no load to full load there is slight change in speed. Thus, it is essentially a constant speed motor. Since the armature torque is directly proportional to the armature current, the starting torque is not high.