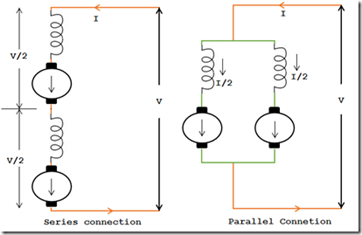 To control the DC series motor this is another way called series parallel technique. This is the method normally used in traction by connecting two or more than that of the series motor are couple mechanically at the same load.

Whenever the series motors are connected in sequence (series) like shown in the figure, each and every armature of the motor receive the one-half of the rated voltage. Thus the speed will be less. If the series motors are connected in parallel, each and every armature of the motor receives the full normal voltage and hence the speed is also high. Thus we can achieve the two speeds (low or high) by connecting the motor either in series or parallel. Note for the same load on the pair of motors, the speed of the system would run nearly 4 times once motors are in parallel as while they are in series.

This series parallel method is generally employed with the resistance control. For example two series motor are mechanically coupled to drive a vehicle. 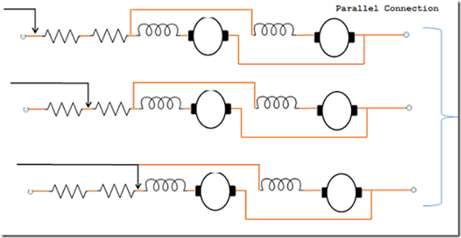