DC Series motor Speed control can be achieved by any one of the following technique:

By continuing this method the flux can be varied and so the speed also varied in DC series motor. In any of the following ways change in flux can be obtained.
i) Field Diverters Method
ii) Armature Diverter Method
iii) Tapped Field Control Method and
iv) Paralleling Field Coils 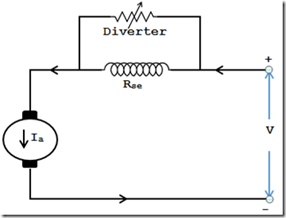 The figure above shows that in the series field winding an adjustable resistance is connected in parallel. Here the adjustable resistance is called as the Field diverter. Its consequence is to bypass certain ratio of the line current. So field becomes weakens and the motor speed increased. The minimum can also be achieved is that the resultant zero current in the field diverter. The minimum speed is nothing but a rated speed of the motor. Therefore this method provides the motor speed only above the normal. This technique is used in traction work. 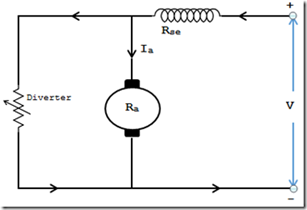 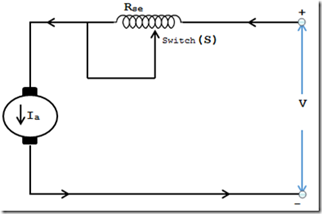 In this method by rearranging the no. of field coils as shown in the fig. different fixed speed can be achieved. This technique is normally used only in the instance of fan Motor. 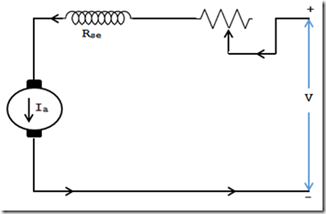 This is the method is used widely to control the speed of the DC series motor. Using this method the speed control can be achieved below the normal speed. An adjustable resistance is connecting in series with the source voltage as shown in the above fig. By varying the adjustable resistor the voltage provides across the armature is reduced and so the speed also decreased. By varying the adjustable resistance whichever the motor speed below the normal rated speed can be achieved. Even though this method provides the reduced speed regulation, this has no importance for series motor since they are used in fluctuating speed applications. The wastage of power in series resistor for a lot of applications in series motor is not too severe later in these applications. The speed control is employed for a major ration of the time for decreasing the speed lower than light-load situations and merely used occasionally while the motor is run at full load.