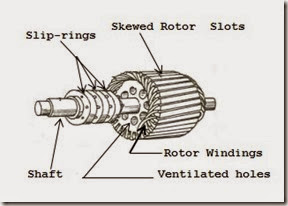 With this external rheostat connected, helps to increase the starting current the starting torque of the motor at starting. Under normal working condition of this motor, the three slip rings are short circuited by means of a metal collar. The three phase winding are short circuited by this arrangement and hence the wound rotor also acts like the squirrel cage rotor under normal working conditions.
During short circuiting the slip rings, the brushes are automatically lifted from the surface of the slip rings. This is to reduce the friction losses and the wear and tear for the slip ring and brushes. For slip rings high quality phosphor bronze is used.


The stator and rotor windings are so arranged for the circulation of air for the purpose of cooling. Enamel insulated copper wires are used for windings. The coils are properly placed in slots to withstand the centrifugal forces and also the stress due to any short circuit. The winding is completely insulated with the use of high quality varnishes. 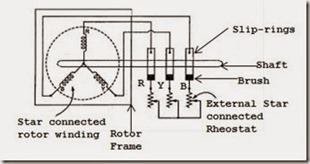 When the stator winding of the slip ring motor is connected to the three phase supply, it produces a rotating magnetic field in the same way as a squirrel cage induction motor. This rotating magnetic field induces voltages in the rotor windings and a rotor current will flow through the closed circuit, formed by the rotor winding, the slip rings, the brushes and the star connected external resistance.

As the motor speeds up, the external resistance is slowly reduced, and the rotor winding is made to be short circuited at the slip ring ends. Because of the reduced rotor resistance, the motor operates with low slip and high operating efficiency. The motor could be started heavy loads with higher resistance or vice versa. However at increase rotor resistance, the motor’s slip will be greater, the speed regulation poorer and it will have low efficiency. The resistance in the external circuit could be designed and varied to change the speed of the slip ring motor between 50 to 100% of the rated speed. However the I2R losses in the rotor due to increased resistance is inevitable.