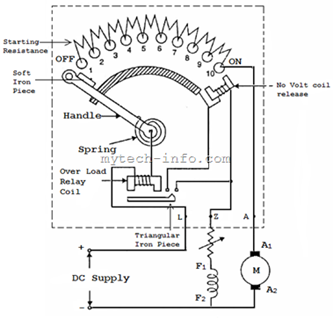 The figure above shows that typical representation diagram of a 3 point starter for DC shunt motors with its protective devices. It contains 3 terminals namely L, Z, & A; hence named 3 point starter. The starter is made up of of starting resistances divided into many section and which are connected in series within the armature. The each tapping point on the starting resistances is carried out to a no. of studs. The starter 3 terminals L,Z & A are connected to the positive terminal of line, shunt field and armature terminal of motor respectively. The remaining terminal of the shunt and armature are connected to the negative line terminal. The No volt coil release is connected in series with field winding. The handle one end is connected to the L terminal by means of over load release coil. Then another end of handle travels against the twisting spring & make touching base with every single stud in the course of starting operation, tripping out the starting resistance as it moves above every stud in clockwise.

Note: If we were not used No volt coil release; then if the supply is cut off the handle would remain in the same position, causing an extreme current in armature.

In point starter, no volt relay coil is connected in series with field circuit; hence it carries shunt current in the field. When  the speed control of DC motor through field regulator, it may be weakened the shunt field current to such extent the no volt coil release might not in a position to hold the starter handle in ON position. This might the motor disconnected from the source when it is not anticipated. This can be overcome by using the point starter.