An electron orbiting right close to the nucleus in the 1st shell is very much firmly bound to the nucleus and keeps only a small amount of energy. Therefore initial shell has lowermost energy levels. Larger the distance of an electrons from the nucleus, the better is it energy. From now the energy levels of the outmost shell is maximum. Due to such high energy, valence electrons in the outmost shell can be effortlessly extracted out and therefore such electros takes part in chemical reactions and in bonding with the atoms together. Now this discussion is linked to the electron and shell of one isolated atom merely. 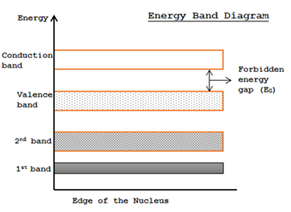 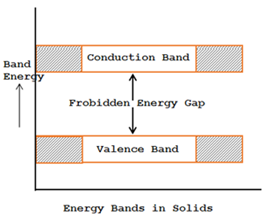 These valence electrons are responsible for forming atomic bonds. The number of valance electrons in an atom also determines the valence of the element whose atom it is. For example, boron is trivalent whereas both Si are Ge are tetravalent i.e., they have four valance electrons each.

The separation gap between conduction band and valence band on the energy band diagram is known as forbidden energy gap and measured in the unit of electron-volt (eV).

In direction to push an electrons from valence band to the conduction band, outer energy equal to the forbidden energy gap must be provided.