Stable and Unstable Region of the Slip Torque Characteristics: 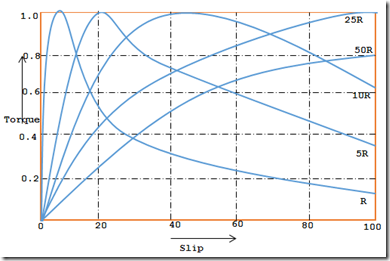 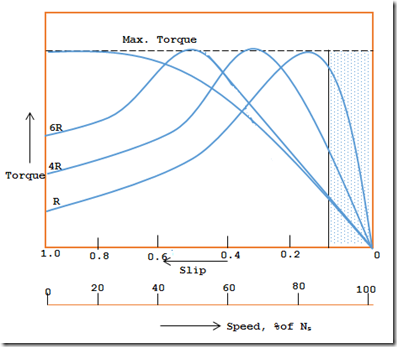 The slip torque curves for various ranges of slip with different R2 are drawn. For slip values ranging from 0 to 1 these curves are drawn.

Using the above relation, the following cases are considered:
Case-1:
From the above relation when s=0, then the torque, T is also zero. Therefore, the curve starts from (0, 0).
Case-2:
When the speed of the rotor is near about the synchronous speed, then the slip s value is very small. Therefore the term (s.X2) is small. On comparing this value with R2, the value (s.X2) is negligible. Substituting these values in the torque equation, we get,
T = (KΦsE2R2) / R22
T ∝ s / R2’ Since Φ, E2 are constants.
Or, T∝s, if R2 is constant. From this, it is understood that for low values of slip the torque slip, curve is more or less a straight line.
Case-3:
When the load on the motor increases, the rotor speed falls down. Then the slip value increases. From the above relation it is seen that, when slip s increases the torque, T also increases. The torque will attain a maximum value, at s = (R2/X2). This torque is called pull out or break down or stalling torque. Further increases in load on the motor causes, the slip to increase still more. For higher values of slip, R2 is negligible as compare to (sX2). Then the torque equation becomes,

Therefore, for higher values of slip, the torque slip curve is a rectangular hyperbola.