The potential difference across a PN junction can be applied in two ways. They are

When an external voltage applied to the PN junctions is in such a direction that it stops the potential barrier, thus allowing current flow, is called forward biasing.

The current flow may be explained in the following two ways:
This enmasse movement of electrons to the left and that od holes to the right of the joint constitutes a large current drift through the semiconductor.

Incidentally, it may be noted that forward bias reduces the thickness of the depletion layer as shown in fig. 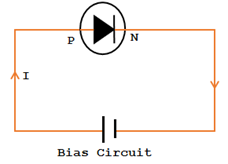 With forward bias to PN junction, the following points are worth noting:

When an external voltage applied to the junction is in such a direction that potential barrier is enlarged, it is called reverse biasing.
When battery connections to the semiconductor are made as shown in the fig, the junction is said to be a reverse biased. 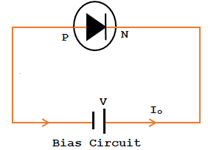 With reverse bias to PN Junction, the following points are worth noting: