Properly doped crystal diode which has a piercing breakdown voltage is called as Zener diode.

When the reverse bias on a PN junction crystal diode is enlarged, a critical voltage called as breakdown voltage is reached where the reverse current rises sharply to high value. The breakdown region is nothing but the knee of the reverse characteristic as shown in the figure. 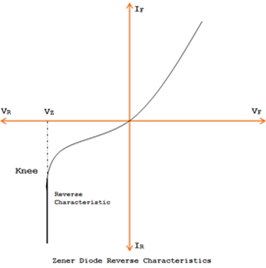 The suitable explanation of this breakdown junction was first given by the American scientist C. Zener. For that reason, the breakdown voltage is sometimes called as zener voltage and the sudden rise in current is termed as Zener current.

The breakdown voltage or Zener voltage depends upon the doping amount. If the diode is doped heavily, depletion layer will be thin and accordingly the breakdown of the junction will take place at lower reverse voltage.


On the other hand a lightly doped diode has a greater breakdown voltage. When a normal PN junction diode is appropriately doped so that it has a sharp breakdown voltage, it is called a zener diode.

Symbol and schematic of Zener Diode 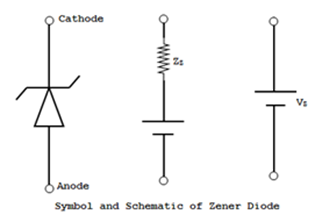 The schematics symbol of a zener diode is similar to that of a normal diode except that the line representing the cathode is bent at the both ends with a little mental effort, the cathode symbol can be imagined to look like the letter Z for zener.

Zener diodes are available having zener voltage of 2.4V to 200V. This voltage is temperature dependent. Their power dissipation is given by the product of VzIz maximum ratings vary from 150mw to 50w.

The following points may be noted about zener diode:

Therefore in the breakdown region, an ideal can be represented by a battery of voltage Vz as shown in the fig. Under such conditions, the zener diode is said to be in the On state. 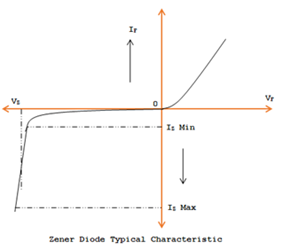 The important points on the reverse characteristics are