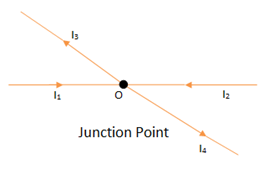 This study of currents flowing in and out in the circuit is nothing but the use of Kirchhoff’s Current Law. This KCL (kirchoff’s law) can be stated as,

This law can also be stated as,
The algebraic sum of all the currents meeting at a point O is always zero. The letter algebraic means in view of the signs of various currents.
ΣI at junction point O = 0

The law states that if one starts at a definite point of a closed path and goes on tracing and noting all the potential changes (either drops or rises), in any one particular direction, till the starting point is reached again, he must be at the same potential with which he started tracing a closed path.

The voltage drop occurs across the resistance whenever a current flows through resistance. The polarity of this voltage drop is always depends on the direction of current. The current always flow from higher to lower potential.

In the Fig-(a), current I is flowing from right to left, therefore point B is higher potential than the point A, as shown in fig.

In the Fig-(b), current I is flowing from left to right, thus point A is at higher potential than the point B, which is also shown.

Once all such polarities are marked in the given circuit, we can apply KVL to any closed path in the circuit.

For example, if the branch AB is traced from A to B then the drop across it must be considered as rise and must be taken as  +IR while writing the equations.

For example, in the Fig-(a) only, if the branch is traced from B to A then it should be taken as negative, as -IR while writing the equations.

In the Fig-(b), current I is flowing from left to right, hence point A is at higher potential than point B, as shown.