Any permutation of linear bilateral circuit elements and active sources, apart from the connections or complication, connected to a certain load RL possibly will replace by a simple two terminal network consisting of a single voltage source of Vm volts and a single resistance Req in series with the voltage source, across the two terminals of the resistance load RL. The voltage VTH is the open circuit voltage measured at the two terminals of interest, with load resistance RL removed. This voltage is known as Thevenin's equivalent voltage. The Req is the equivalent resistance of the given network as viewed through the terminals where RL is connected, but with RL removed and all the active sources are replaced by their internal resistances. 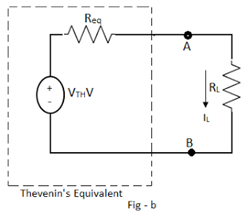 The voltage VTH is obtained across the terminals A-B with RL removed. Hence VTH is also called open circuit Thevenin's voltage. The circuit to be used to calculate VTH is shown in the Fig-a, for the network considered above. While Req is the equivalent resistance obtained as viewed through the terminals A-B with RL removed, voltage sources replaced by short circuit and current sources by open circuit. This is shown on the fig - b.

While obtaining VTH, any of the network simplification techniques can be used. When the circuit is replaced by Thevenin's equivalent across the load resistance, then the load current can be obtained as

The limitations of Thevenin's theorem are;