HRC Fuse and Its Types 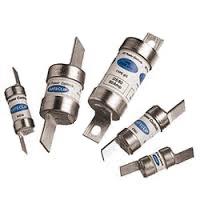 The abbreviation of HRC fuse is High Rupturing Capacity Cartridge fuse. It is one of the easiest forms of fuse which is used for the purpose of distribution. HRC fuse consist of a fuse wire in it, which carries the short circuit current to a limited period of time. During the short circuit period, if fault is removed immediately, then the fuse wire doesn’t melts. In case if the fault occurs continuously then fuse element melts and disconnect the circuits form the supply. The low  and uncertain  breaking  capacity  of  semi  closed  fuses  is overcome  in  HRC Fuses. Generally the material used for HRC fuse is glass but which is not always in the case. Other than the glass some chemical compound also used to make HRC fuse and it depends on construction based on different factors. HRC fuse can be classifieds into three types and they are

The body of this fuse is highly heat resisting ceramic having metal end caps at both the ends, which is welded by silver current carrying element and is of cylindrical shape.  The fuse element is generally silver, attached between the fixed elements. The fuse body surrounding space is completely filled  with  quartz  sand, plaster of paris or marble dust. 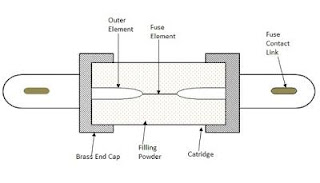 Whenever the current flows through the fuse is higher than the rated current and then the HRC fuse element is melted and vaporized. The  filling  powder material  is  selected  such  that  its  chemical  reaction  with  silver vapor  forms very  high  resistance  substance, which helps in quenching the arc in fuse. As current is cut off, the high resistance is converted into an insulator like glass beads. The electrical phenomenon of HRC fuse includes the rise in temperature and generation of high internal pressure on the interruption of fault current.

These types of fuses are compact in size and low weight. It provides the protection against the overload and short circuit condition for low and medium voltage. Generally it is used for the backup protection of motor starters and other equipments to protect against short circuit and over load.

This type of fuses is generally used in air and gas insulates switch gear, mining, transformer and feeder sectionalizing. DIN fuses are used based on their characteristic and the condition of temperature for different purposes. It is available at different voltage ratings to protect the transformers still when there is no back up protection or secondary. It has the exceptional clearing capability during low over current with short circuit performance.

It is made up of plastic body and two metal end cap are fitted in the socket ends. This type of fuses is used in automobile wiring to protect against the short circuit. It contains low cut off current. It is available in variety of size and shapes with different current rating based on the applications.