The ration of the collector current to the emitter current is called dc forward current transfer ratio or the dc current gain. It is designated by αdc  and is known as the alpha dc.

Common Base dc current gain, αdc = IC / IE.
Where IC and IE are the magnitude of the collector current and emitter currents at a particular point on the transistor characteristics.

As the collector current is always less than emitter current, the value of αdc is always less than unity.
Typical values of αdc lies in the range of 0.95 to 0.998.
From equation, αdc = IC / IE, We have IC = αdc IE.
We can write αdc simply as α, then IC =αIE
Since IC = IC(majority) + ICBO(minority), the above equation can be written as
IC = α IC (majority) + ICBO
We know that IE = IC + IB  or
IB = IE – IC  = IE – (αIE + ICBO)
IB = IE (1-α) – ICBO
Neglecting ICBO, we can write IB = IE (1-α)
Common-base short circuit (ac) current gain is defined as the ratio of a small change in collector current (ΔIC) to the corresponding change in emitter current (ΔIE) at constant collector-base voltage. It is denoted by αac.
αac = (ΔIC / ΔIE) / VCB = constant.
For all practical purpose dc current gain is considered equal to the ac current gain. i.e. αdc = αac.
This parameter is extremely important in transistor theory. It should be pointed out that α is not a constant, but varies with emitter current IE, collector to base voltage VCB and temperature.

Characteristics of Common Base Configuration 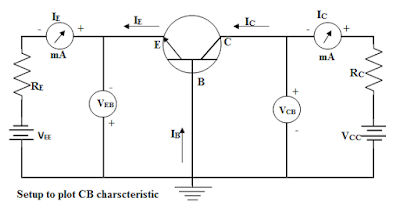 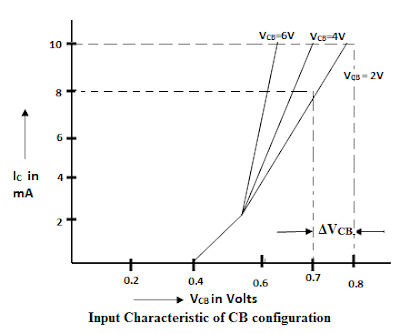 The emitter current, IE is kept constant (say 2mA). The collector to base voltage is varied from zero in suitable steps; say IV and corresponding values of IC are noted. The experiment is repeated for different values of IE. The output characteristic curves obtained are shown in fig. 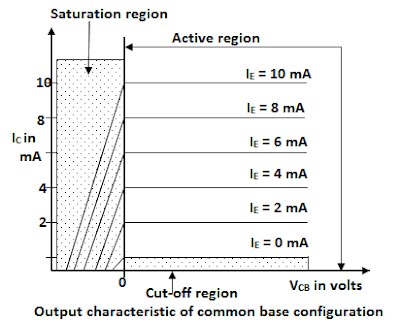 The common base configuration output characteristics can be divided into three distinct regions namely
The output characteristic curve may be used to determine dynamic output resistance, It is defined as the ration of a small change in collector to base voltage to the corresponding change in collector current are constant emitter current.
output Resistance Ro = {ΔVCB / ΔIC} IE = Constant