The full bridge rectifier is the most frequently used circuit for electronic DC power supplies.

Generally we use AC device in many of the apparatus. We need AC source to operate those devices. We don’t have many devices which work on DC supplies. However with the expansion of electronics the DC source is leading its importance. Since these electronic devices gives an efficient method for AC to DC conversion. In an earlier days, we used synchronous converter and the process of conversion was ineffective. But now with the advancement of electronic devices, the diodes are used for the rectification process i.e., AC to DC to function the DC devices such as computer, battery charger, etc. All this is possible with the development of semiconductor technology. Rectifier is used, to convert the AC voltage waveform to a rectified voltage. We have other types of rectification methods that can also be used. 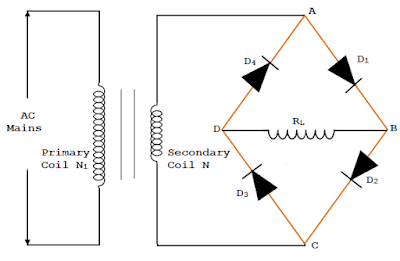