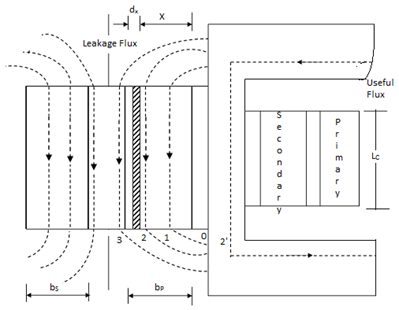 Leakage reactance of core type transformer: - Consider a portion of the transformer with the primary coil wound over the secondary, both the coils being cylindrical, as shown in the fig. The radial thickness of primary coil is bp and secondary coil is bs and the air gap ‘a’. Allot half the radial air gap to the primary and half to the secondary.
First consider a primary coil placed isolated in air. When current flows through a coil, it creates flux in the whole atmosphere. If the coil is place over an iron core, it will again produce flux but this time most of the flux will flow through the core. However, there will be some flux passing through the air depending up on the relative permeability of the core and air. Thus, in our case also, inspite of the core there will be some flux passing through the air. But this flux will be so small that it can be neglected and we can safely assume that when the transformer is on no-load, all the flux produced by the primary coil passes through the core. In other words, all the flux produced by the primary coill links with the secondary coil and so there is no drop of voltage on no load.
Now consider the transformer on load. Because of load current flowing in both the primary and secondary fluxes will be produced independently by the two coils. Depending upon the value of current, primary and secondary coils will both develop their corresponding fluxes in air. From the total flux produced we have to find out which is the leakage flux. It is this leakage flux which causes an emf to be induced in the coils which appears as the reactive voltage drop in them, Greater the current, greater the leakage fluxes and so also the reactive drops.

What is leakage reactance of Transformer?

Leakage reactance is a Inductive reactance due to leakage flux that links only the primary winding of a transformer.

What is leakage flux?