The basic connection of a p-n-p transistor is shown in the figure below. 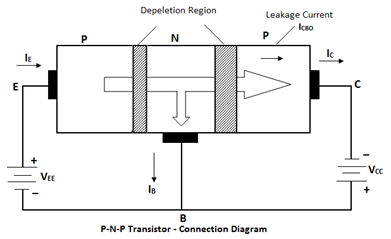 
Now consider the action of a p-n-p transistor whose emitter-base junction is forward biased and collector –base junction is reverse biased. A large number if majority carriers (holes, say X in the emitter and the electrons, Y in the base will diffuse across the forward biased p-n junction.
Hence the total current flowing across this junction is the sum of hole diffusion current and electron diffusion current. This total current is called the emitter current, denoted by IE,
Emitter Current IE= IP(x) + In(Y)
Since the central region, i.e. base is very thin and lightly doped, the majority carriers that starts from the emitter get very little chance to recombine in the base and across the base region to reach the collector. Only a few majority carriers (x) are lost due to recombination. In practice about 2 percent of ht emajority carres which diffuse into the base, recombine with electrons.
The total loss of the number of electrons is (Y+y) is made up by the flow of an equal number of electrons from the negative terminal of a dc battery VEE in to the base. The base by such electrons constitutes the base current IB. Hence the magnitude of the base current, IB is very small and is the order of micro-amperes.
Base current IB = In(Y+y)

The larger the number of carriers reaching the collector from the emitter, the larger power gain if the device. For this, the base should be very thin and the area of collector–base junction should be large. So the collector current is only slightly than the emitter current.
Applying Kirchoff’s current law  to the transistor, we get,
IE = IC + IB.