The following are the types of duty as per I.S.4772 – 1968 “specification for “Electrical rotating Machines”.

On this duty, the duration of load is for a sufficiently log time such that all the parts of the motor attain thermal equilibrium i.e., the motor attains its maximum final steady temperature rise.

Example of rotating machines with continuous duty are continuously running fans, pumps and other equipment which operate for several hours and even days at a time.

The simplified load diagram for this duty is a horizontal straight line as shown in the figure below: 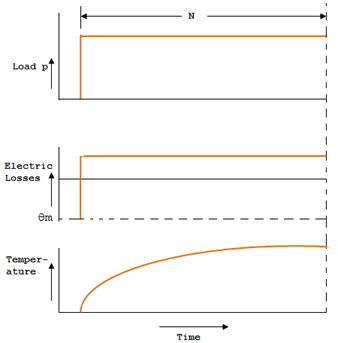 The continuous rating of a motor may be defined as the load that may be carried by the machine for an indefinite time without the temperature rise of any part exceeding the maximum permissible value.

The motor operates at a constant load for some specified time which is then followed by a period of rest. 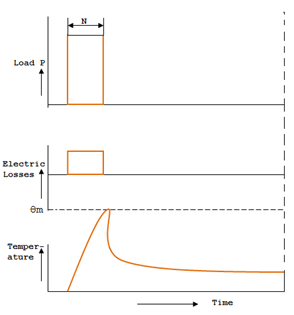 Railway turn table, navigation lock gates are some examples of the drives which operate on short time duty. The simplified diagram for short time duty is shown in the figure.

The short time rating of a motor may be defined as its output at which it may be operated for a certain specified time without exceeding the maximum permissible value of temperature rise. The period of operation is so short that the temperature rise of the does not reach its final steady value and the period of rest is so long that the motor returns to cold conditions. 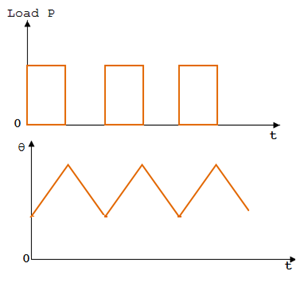 For the evaluation of intensity of heating due to intermittent period load, use is made of duty factor. The duty factor (also called Load Factor (or) cyclic duration factor) is generally defined as the ration of the heating period (working period) to the period of whole cycle.

This type of duty consists of a sequence of identical duty cycles each consisting of a period of starting, a period of operation at constant load and a rest period, the operating and rest periods are too short to obtain thermal equilibrium during one duty. 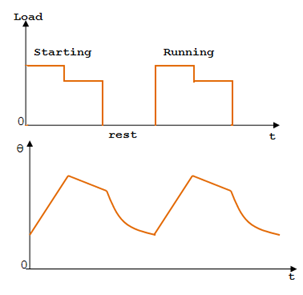 In this duty, the stopping of the rotating machines are obtained either by natural declaration after disconnection of the electric supply or by means of breaking such as mechanical brake which does not cause additional heating of windings. 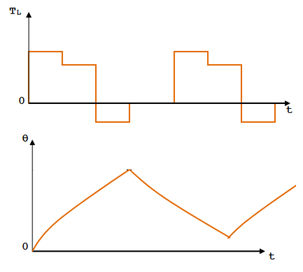 In this type of machines heat loss cannot be ignored at the time of starting and braking. So, the corresponding periods are starting period, operating period, braking period and resting period, but all the periods are too short to attain the respective steady state temperatures, these techniques are used in billet mill drive, manipulator drive, mine hoist etc.

In this category the machine duty, the whole thing is similar to that of periodic duty but here a no load running period is occurred instead of the rest period. Examples are Pressings, cuttings etc.

As per S6, but with a significant starting and electric breaking periods.  Again motor operates at no-load for period instead of stopped

In this drives, there are various running periods at various loads and speeds. But there is no rest period and the entire periods are too short to achieve the steady state temperature.

In this drive system, the load and speed vary from time to time within the acceptable operating range. Frequent overloading may occur.

Duty with discrete number of load/speed combinations, with these maintained long enough to reach thermal equilibrium.

Thermal Equilibrium is the state reached when the temperature rise of the machine does not vary by more than 2K per hour. Generally if we don't indicate the duty cycle, the manufacturer will probable guess S1.