Since there are no rotating parts which induce a ventilating draught, transformers are more difficult to cool than rotating machines.

For small outputs, up to, say,, 20KW, the external surface is sufficient to enable the heat produced by the losses to be dissipated by radiation, i.e. plain tanks larges large enough to contain the transformer are sufficient to dissipate the heat developed inside because of the various losses.

However, as the size of the transformer increases a normal plain tank may not be able to dissipate its losses. In the case cooling tubes are provided which increase the heat dissipating area.

The letter symbols used for designating these methods depending upon:

The circulation of the cooling medium may be through natural means there may be forced circulation of coolant. Accordingly the symbols used are:
Natural – N,   Forced – F

The orders in which letters are used to designate methods of cooling without external heat exchangers are:
(a) The medium in contact with the windings.
(b) The circulation of the coolant in contact with windings

This method uses the ambient air as the cooling medium. This method is used for small low voltage transformers.

Cooling by natural circulation of air sometimes becomes inadequate, and then air blast type is used. In this method, the transformer is cooled by continues blast of cool air forced through cores and windings. The air blast is produced by external faces. 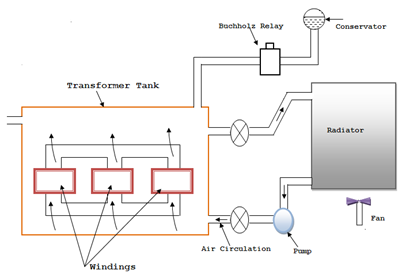 In general most transformers are of oil immersed type. The oil provides better insulation than air as it is a better conductor of heat than air. Mineral oil is used for this purpose.

Oil being better conductor of heat than air is used in almost all transformers (Except for the transformers used for special applications like mines where there is a fire hazard) are oil immersed.
Transformers up to a capacity of about 5MVA or a loss up to 50KW use tanks with tubes. The tubes are usually round and are 50mm in dia and are arranged in one to three rows.

In his method, the oil circulation under natural head transfers heat to the tank walls. The transformer tank is made to hollow and air is blown through the hollow space to cool the transformers.

In this method, oil is circulated through the transformer with the help of a pump and cooled in a heat exchanger by natural circulation of air.

The oil is cooled in the external heat exchangers using air blast produced by fans. Generally mixed cooling conditions are used with ONAN conditions up to 50% transformer rating and OFAN condition at higher loads.

The heat oil is cooled in water heat exchangers. This cooling method is suitable for banks of transformers. OFWF is used for transformers designed for hydro-electric plants.