Why a bias a transistor?

DC biasing is a static operation. It deals with setting a fixed level of current with a desired voltage drop across the device. the purpose of DC transistor biasing is to obtain certain DC collector current at a certain DC collector voltage. These values if current and voltage define the point, at which the transistor operates. This point is known as operating point or quiescent point.

After knowing that transistor functions most linearly when it is constrained to operate in its active region. Consider a common-emitter circuit as shown in the fig below. The transistor is biased with two dc supplies namely VBB and VCC to obtain the fixed values of IB, IC, IE and VCE. 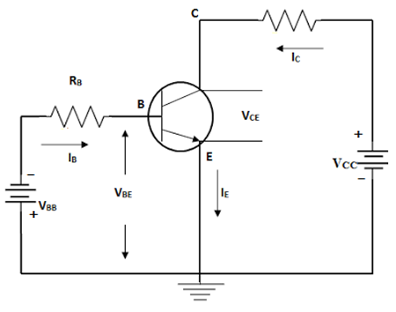 The output (collector) characteristic curves for this particular VBB forward biases the emitter-base junction whereas the dc supply VCC reverse biases the collector-base junction. the resistor RB is a current limiting resistors, used to limit the base current within certain specified levels. Applying Kirchhoff’s voltage law to the collector circuit,

we get VCC + ICRC + VCE
where ICRC is the voltage across RC.

The above equation is in the form of y=mx+c which is the equation of the straight line. Here m=(-1/RC) is the slope of the line and c=Vcc/RC is the intercept on Y-axis. As Vcc and RC constants, it is a first degree line which is commonly known as the load line equation on the output characteristics. The load line determines the locus of VCE and IC for any given value of RC. 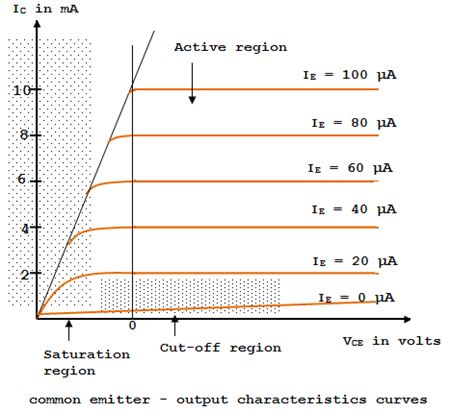 The two points needed to draw the dc load line are located a s follows:
This corresponds to the saturation point A(OA – ICmax) on the IC (Y-axis) axis.
we get VBB = IBRB = VBE
where IB = VBB/RB

since VBE<<VBB,      IB = VBB/RB
If we draw a characteristic curve for this IB; then intersection of this curve and dc load line gives the operating point Q. This point is the fixed point on the output characteristics. So it is called the quiescent point or simply Q-Point. Once an operating point is established, time-varying excursions of the input signal should cause an output signal of the same waveform.

If the output signal is not a faithful reproduction of the input signal, the operation point is unsatisfactory and should be relocated on the collector characteristics. As long as the transistor is operated in the active region, the output voltage is a linear reproduction of the input. Note that for normal operation, the Q-point of a transistor is selected midway between the saturation and cut-off i.e., where the collector to emitter voltage VCE is equal to half of the VCC supply.