It is one of the most important semiconductor devices. It was invented by William Shockey in the year 1947. The term transistor is derived by contracting the word transfer resistor.
The transfer of current here takes place from a low resistance to high resistance circuit. The transistor created a revolution in the field of electronic leading to other inventions like integrated circuits IC, opto–electronic devices and microprocessorss. Transistor has replaced vacuum tubes in almost all applications.
The basic function of a transistor is to amplify a weak signal, used in analogue circuits. It is also used as a switch or a gate in digital circuit.

An electronic circuit device that consists of two P-N junctions formed by sand wiching either P-type or N-type semiconductor between a pair of opposite layers is known as transistor.

A transistor has three doped regions known as emitter, base and collector. All these regions are provided with the terminals.

The left hand region of transistor shown in the fig is called the emitter and it is heavily doped than the other two regions of a transistor.
Its main function is to supply majority carriers either electrons or holes to the base. The emitter is always forward biased with respect to base so that it can supply large number of majority carriers.

The narrow central region of the transistor is called the base. The thickness of this region is very thin and is very lightly doped. As the base emitter junction is forward biased, it offers low resistance for the emitter current. 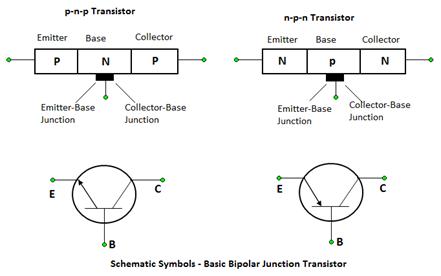