Class-A amplifier, which has centered Q point. Therefore the transistors operate only over the linear region of its load-line.

So, it is an amplifier in which the circuit output current flows throughout the complete cycle of the input signal i.e., conduction angle is 360o. In other words, the transistors remain forward biased right through the input cycle. 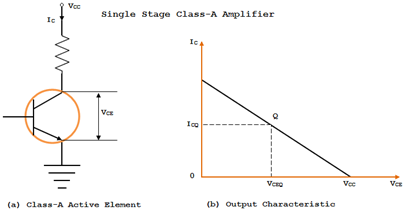 The figure-a shows that the connection of common-emitter transistor which forms the active element of a single stage class-A amplifier. The figure-b shows its output characteristics with a centered Q point.

When ac input signal is applied, “Q point” moves up and down from its central position. The output current also will increase or decreases from its quiescent value ICQ. Similarly collector-emitter voltage VCE will increase or decrease from its quiescent line, average value of collector current is ICQ because positive and negative input signal swings will produce equal changes in ICQ.

The output or collector characteristics of a common-emitter connected transistor are shown in the figure below with centered Q-point for class-A operation. When the input signal is given, then the Q-point shifts to positions Q1 and Q2 alternatively. 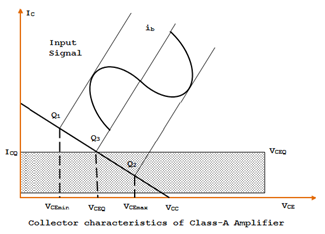 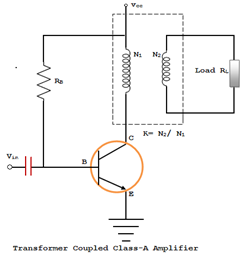