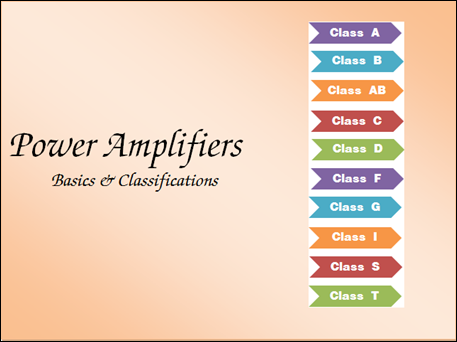 An amplifiers system usually consists of several cascaded stages. Amplifiers are classified in many ways, according to their frequency range, the method of operation, the ultimate use, the type of load, the method of inter-stage coupling etc.

On the basis, power amplifiers are classified as:

A class B power amplifier is one in which the operating point is located at an extreme end (cut-off) of its characteristics. The output current flows only for half cycle i.e., 180o of the input signal. The current will be zero for the other half cycle. Because of the small power dissipation, efficiency is high.

A class AB amplifier is one in which the operating point is chosen so that the output current flows for more than half the cycle and less than the full cycle of the input signal.

A class C power amplifier is one in which the operating point is chosen so that the output current flows for less than half the input signal. The current flows in the form of pulses. The efficiency is very high.

Class A, Class AB, Class B operations are used with untuned amplifiers for audio frequencies, whereas Class C operation is used with tuned radio frequency amplifies.

Other Classification of Amplifiers

Class D amplifier is fundamentally a non linear switching amplifier. It is also called as PWM amplifier. Theoretically class D amplifier can achieve 100% efficiency, since there is no period throughout a cycle were the voltage and current waveforms overlie as current is drawn only through the transistor that is on.

Class F amplifiers can boost both the efficiency and output with the help of harmonic resonators in the output network to obtain the square waveform at the output. This class of amplifiers attains high efficiency (above 90%) if the infinite harmonic tune is used.

It offers the of enhancement design of basic class AB amplifier design. Class G uses several power supply rails of different voltage and automatically switches between these supply rails when there is a change in input signal. This continuous switching reduces the normal power consumption. Thus power losses caused by wasted heat.

Class I amplifier has 2 set of paired output switching device arranged in a equivalent push-pull arrangement with both sets of switching devices sampling the identical input waveform.

Class S amplifier operation is similar to that of Class D amplifier. It converts the analog input signal into the square waveform with the help of delta sigma modulator, and amplifies them to increases the output power before finally being demodulated by a band pass filter. The digital signals of this switching amplifier are constantly either fully “ON” or “OFF”.