The relays operating characteristic on R-X diagram, is a straight line parallel to X axis as indicated below in figure. 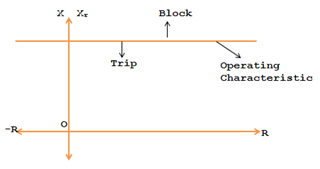 As the value of K3 is very small, it can be neglected.
T = K1l2 – K2VI sin Φ.
VIsinΦ indicates reactive voltamperes.

The reactance relay will operate, when the measured value of the reactance is less than the predetermined or design value of K.

The directional unit used with the reactance relay is not the same as the one used with the impedance type relay because the reactance relay will trip under normal load conditions when the power factor of the load is unity or near zero. This is because; the restraining reactive volt-ampere at U.P.F or near U.P.F will be near zero. Therefore, we must have directional unit is called Mho unit or Mho relay, having a circular characteristic.

Reactance relay are used for protection of short lines having fault currents less than 20 KA. In such lines, the effect of fault resistance or arc resistance is predominant.

For first, second and third zone protection of the transmission line, reactance relays as employs for 1st and 2nd zones. The directional unit, a mho starter relay acts as 3rd zone protective relay. 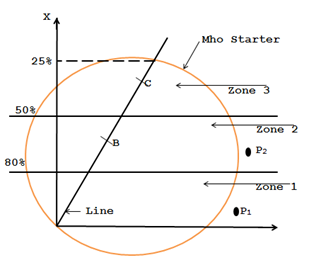 The directional unit used with the reactance relay, viz. mho starter, has a circular characteristic, because of the reason explained below:

Under normal conditions, with a load of high power factor the reactance measured by the relay may be less than its setting. Such points P1 and P2 in the diagram lie in zone 1 and 2 respectively. To prevent false tripping under such conditions, the reactance relay should be supervised by a fault detecting unit (starting unit or starter), which limits its area on the R-X diagram. Hence its characteristic should be a circular one. The starting unit detects fault and also serves the function of 3rd zone unit.