Solid state relay or static relay is an electrical relay, in which the response is developed by electrical / magnetic / optical or other components without mechanical movement of components.

In static relay, the comparison or measurement if electrical quantities is done by a static circuit. This circuit gives an output signal for the tripping of a circuit breaker. In general, static relays are having a DC polarized relay as slave relay. The slave relay is an output device and does not function as a comparison or measuring device like a normal relay. It simply closes the contacts. It is preferred because of low cost and provides a number of output contacts. On a fully static relays, a SCR is used in place of electromagnetic slave relay. Electromagnetic multi contact tripping arrangements are much cheaper and simple than an equivalent group of SCR circuits.

A static relay or solid state relay employs semiconductor diodes, transistors, zener diodes, SCRs, logic gates etc. as its components. In present days, IC’s are used in place of transistors and as they are more reliable and compact.

The static relays are replacing all electromagnetic relays like induction cup relays for distance and directional protection and disc relays for over current protection (except the attracted armature relays and DC polarized relays), because these relays control can many circuits at low costs.

The simplified block diagram of a static relay as shown in the figure below; 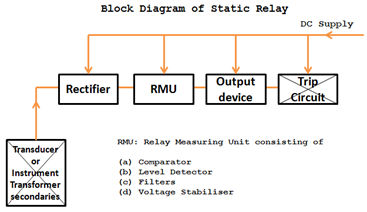 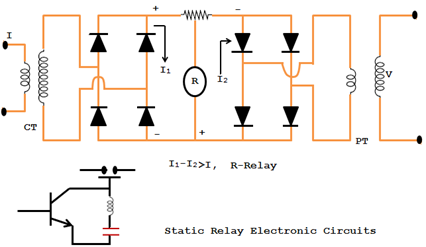 As said, in static relay the comparison of the quantities is done by static electronic circuits. Rectifier converts AC to DC. Under normal conditions, “I” in the relay is zero. During I1 – I2 flows through the relay. This flows to transistor and pulse circuit. When there is a pulse, the transistor acts as a closed switch and opens the contacts of circuit breaker.

How a static relay works 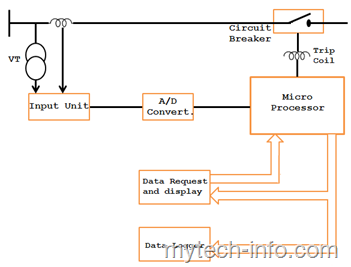 Earlier, for each function, a separate electro mechanical or static unit was used with complex wiring.

Types of Electronic circuits in a static protection system

A static relay may have one or more programmable units viz. Such relay is called programmable relay of protection is used at Generating Station and substation levels, for Back-up protection, load shedding, auto reclosing of breakers, sequential trippings etc.

At the load dispatch centre, the relay is used for Load Management, Load – Frequency control, economic load dispatch and emergency corrective measures, by tripping or shedding the load.

1. Electrostatic Discharges (ESD): Semiconductor components are quite sensitive to electrostatic discharges developed by rubbing of insulating components. Hence, during manufacture of static relays, precautions are needed to avoid ESD.
2. Static relays are sensitive to voltage transients or voltage spikes caused by the operation of circuit breaker and isolator in the primary circuit of CTs and PTs. In their secondary circuit, the voltage spike can reach amplitude of 20KV even, but generally 12KV. In order to avoid this, filter circuit and usage of screen cables are adopted.
3. Static relays are temperature dependent. I.e., the characteristics of transistors, diodes used in a static relay, change with temperature variants. To avoid this, temperature compensation is provided by means of Thermistor circuits.
4. The price of static is higher than the equivalent electromagnetic relay. But multifunctional static relays provided economy of cost.
5. Total reliability of static relays depends upon the various small electronic parts.