Comparator is a part of static relay, which receives two or more inputs to be compared and gives output based on the comparison.

The various types of comparators are;

An amplitude comparator compares the magnitude of two input quantities irrespective of the angle between them. One of the inputs is the operating quantity and the other a restraining quantity.

When the amplitude of the operating quantity exceeds that of restraining quantity, the relay sends a tripping signal to the circuit breaker. 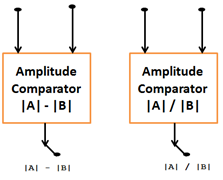 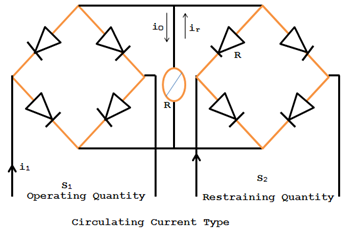 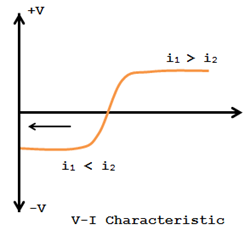 It can also be used as impedance relay. Two rectifier  bridges can be arranged in such a manner as shown in the figure below, to function as amplitude comparator circulating type.

The polarized relay operates when S1>S2 where S1=K1i1 and S2 = K2i2. This arrangement gives a sensitive relay whose voltage may be represented in the VI characteristic of the figure. 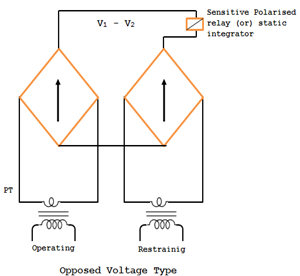 This type works with voltage input signals derived from PTs. The operation depends on the difference of the average rectified voltage (V1-V2).Here the rectifiers are not protected against higher currents. The relay operates when V1 >V2.

Here the restraining signal is rectified and smoothed completely in order to provide a level restraint.

This is then compared with the peak value of operating signal, which may or may not be rectified but is smoothened. The tripping signal is provided if the operating signal exceeds the level of the restraint. The block diagram is shown in the fig above. Since this method involves smoothening, the operation is slow. A faster method is phase splitting the wave shapes of instantaneous amplitude comparator are shown in fig below before rectification and the averaging circuit can be eliminated.

Phase comparison technique is the most widely used one for all practical directional, distance, differential and carrier relays.

If the two input signals are S1 and S2 the output occurs when the inputs have phase relationship lying within the specified limits.

Both the input must exist for an output to occur. The operation is independent of their magnitudes and is dependent only on their phase relationship. The figures below show that the phase comparator is simple form. The function is defined by the boundary of marginal operation and represented by the straight lines from the origin of the S-plane.

In short, a phase comparator compares two input quantities in phase angle (vertically) irrespective of the magnitude and operates if the phase angle between them is < 90o.

There are two types of phase comparators:

This comparator recognizes the vector product or division between the two or more quantities. Thus, the output is A, B or A/B

This kind of comparator compares both magnitude and phase of the input quantities. Hence this type is of mixed version.

Static impedance relays comparing V and I are generally of Hybrid Comparator.

Level detector determines the level of its input with reference to a predetermined setting. 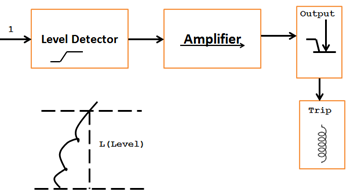