This has four types i.e., plunger, hinged armature, balanced beam and moving iron polarized. These are the simplest types which responds to AC and DC. 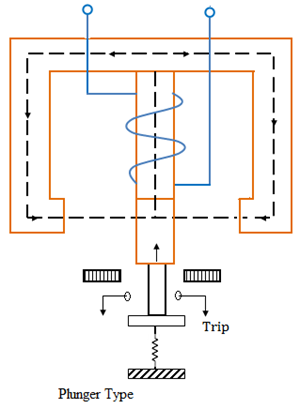 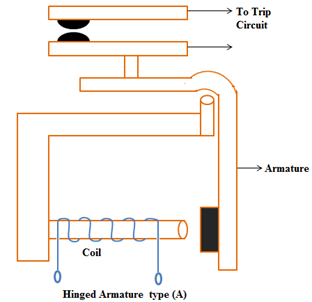 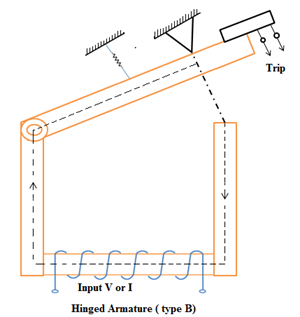 This type of relay is used for protection of small machines and also used for auxiliary relays such as indicating relays (flags) alarm and annunciator relays etc. 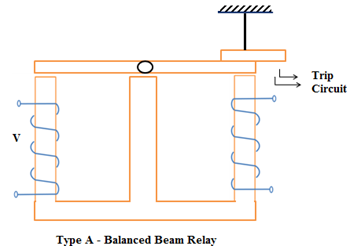 All these relays have the same principle. That is electromagnetic force produced by the magnetic flux which in turn is produced by the operating quantity. The force exerted on the moving element is proportional to the square of the flux in the air gap or square of the current. In DC electromagnetic relays this force is constant. If this force exceeds the restraining force, the relay operates.

It has a metallic disc free to rotate between the poles of two electro magnets.
The spindle of this disc carries a moving contact which bridges two fixed contacts when the disc rotates through an angle, which is adjustable between 0o to 360o. By adjusting this angle the travel of moving contact can be adjusted so that the relay can be given any desired time setting which is indicated by a pointer. The dial is calibrated from 0-1. The relay time from name plate cure is to be multiplied by time multiplier setting. 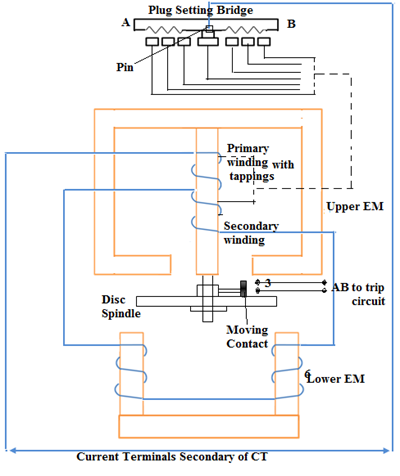 The rotating disc is made of aluminum. In the above type one half of each of electromagnet shown in fig, is surrounded by a copper band called as the shading ring. The shaded portion of the pole products a flux which is displaced in space and time w.r.t the flux produced by the unshaded portion of the pole. These two alternating fluxes cut the disc and produce eddy currents in it. Torques are produced by the interaction of each flux with the eddy current produced by the other flux. The resultant torque causes the disc to rotate.

At a current below the pick-up value, the disc remains stationary by the tension of the control spring acting against the normal direction of disc rotation. The disc rests against a backstop. The position of the back-stop is adjustable. So that the relay-contacts travel distance can be varied according to need. This is called time-setting of the relay.
In disc-type relays, there are a number of tappings provided on coil, to select the desired pick-up value of the current. 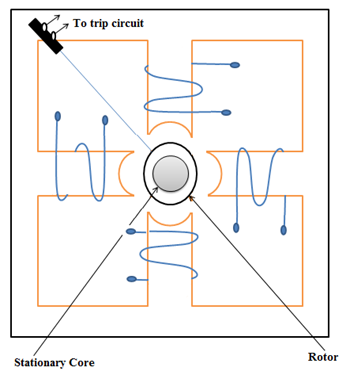 The operating is similar to induction motor. It consists of a stationary rotor iron core and moving rotor conductor (cup). The moving element is a hollow cylinder or cup which turns on its axis. The driving element is a four or eight pole structure placed radially around the outside of the cylinder and joined by an yoke. To shorten the air-gap, a stationary iron core is placed inside the rotate cylinder.

It is a high speed induction relay since inertia is less. the two pairs of coils are displaced by 90o. When these coils are excited, a rotating magnetic field is produced. The rotor cuts the magnetic field and an emf is induced in the rotor. which results in a current due to short circuit nature of the rotor. A torque is produced due to the interaction between the rotating flux and the induced current which causes the rotation of the cylinder. The movement of the rotor closes the trip circuit. The torque produced is proportional to |I1| |I2| sin α or Φ1 Φ2 sin α, where Φ1 Φ2 are the fluxes due to excitation currents I1 and I2 of coil pairs and α is the phase difference between the two fluxes.

Due to low weight of the rotor and efficient magnetic system, its torque is found to be three times that of an induction disc types. As this type of relay has high torque /weight ratio, high speed operation is possible.

It has two types: 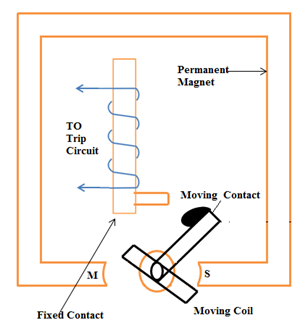 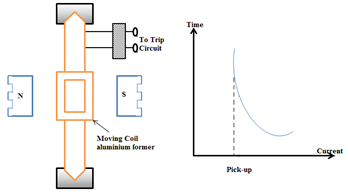 It consists of a permanent magnet coil wound on a non-magnetic former, spring, spindle etc. as shown in the fig. The coil is energised by the fault current. Due to the interaction of the permanent magnetic field and the field due to the coil, moving torque is developed. Due to this the spindle rotates and closes the trip circuits. It has negative time-current characteristics as shown in the figure. It has high torque / weight ration.

F α NHIL
where F = Force, N= No. of turns, H=Magnetic Field, I=Current in the coil, L=Length of coil 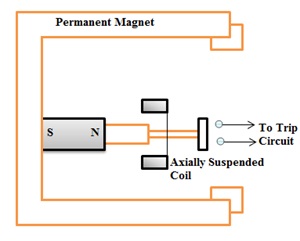 It has axially suspended coil wound on a former. The coil has only axial movement. When the coil is energized by the current, magnetic field is developed and this magnetic field is repelled by the already existing permanent magnet. Due to this, contacts get closed.

This relay is more sensitive and faster than the rotary moving coil relay. This relay has inverse operating time-current characteristics.