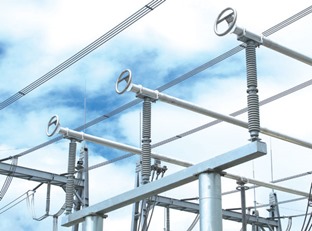 Busbar protection or bus zone protection includes, besides bus itself, the apparatus such as circuit breakers, disconnecting switches, instruments, transformers etc. Though the bus zone faults are rare, experience shows that bus protection is highly desirable in large and important stations.

Moreover, the need for bus zone protection is highly felt because, the faults level at busbar is very high and the faults on bus-bar causes discontinuance of power to a large portion of the system. A bus fault tends to be appreciably more severe, both with respect to the safety of personnel, system stability and the damage to the equipment's.

The desirable features of bus zone protection include the following:

The causes of busbar faults can be ;
The clearing of a busbar faults requires the opening of all the circuit branching from the faulted bus zone or busbar section.

A simple differential protection scheme is shown in the figure below. It is based in simple circulating current principle that during normal load conditions or external fault conditions, the sum of currents entering the bus equals the sum of the currents leaving the busbas, i.e., I1 + I2 = I3 + I4 + I5. 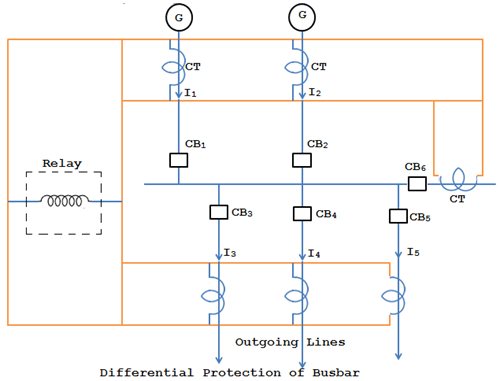 Hence no current will flow through the relay and it will not operate. If any fault, either a phase to phase fault or phase to earth fault occurs in the systems, the sum of these currents will not be zero and some current will flow through the relay and causes the relay to operate and isolate the faulty section. That is a current in the relay indicates a fault within the protected zone and initiates opening of the generator breaker CB1 and CB2 and each of the line breakers CB3, CB4 and CB5 including the bus breaker CB6.

In this type, the busbars can be sectionalized to identify the fault in that particular section.

The main drawback with this type of differential protection is the difference in the magnetic conditions of the iron cored CTs which may result in false operation of the relay at the time of an external fault. Even with identical CTs having large iron cores to avoid the saturation with maximum fault currents, the DC transient component presents difficulty because of its slow decay. Biasing of differential relays improves the stability considerably; but is not a complete solution. It can be seen that a high impedance bus differential relay can discriminate between internal and external faults better than the usual low impedance relay. In other words, the ratio of the relay current during an internal fault to relay current during an external fault is greater if the impedance of the relay is higher. 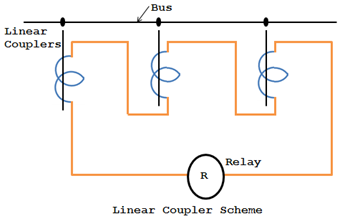 A special type of CT having no iron core, also known as the linear coupler is sometimes employed to overcome the difficulties of an iron cored CT. In case of a linear coupler the secondary voltage is proportional to the primary current and the secondary windings of all couplers on the same bus section are connected in series to the relay as shown in the figure. The sum of their voltage outputs is equal to the vector sum of the voltages in the circuits connected to the busbars.

Under normal and external fault conditions the voltages add up to zero, whereas for an internal fault there is a resultant voltage in the secondary circuit and the relay operates.