Turn to turn or inter turn fault on the same phase winding of the stator, can be never sensed by the percentage differential protection relay, which is otherwise called as modified Merz-price differential relay. This is because, the current that these types of fault produces, flows in  a local circuit between the turns involved and does not create a difference between the currents entering and leaving the winding at its two ends where the CTs are placed.

In case of multi coil wound stator, as used in hydro generators, each phase winding is divided into two halves, owing to very high currents they have to carry. 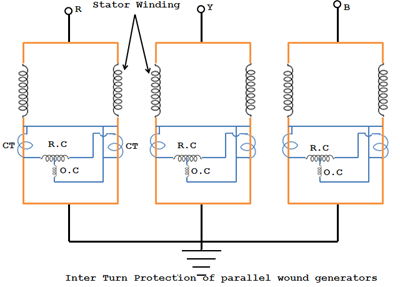 Parallel Wound Generator:
The schematic diagram of a biased transverse differential protection for stator inter-turn faults is shown in the figure above.

Generator with single winding per phasor having inaccessible parallel winding 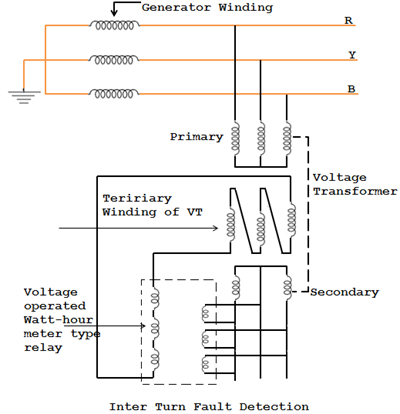 This type of protection uses zero sequence components of voltage caused by the reduction of emf in the faulted phase, When the fault occurs, the zero sequence voltage appears across tertiary winding of the voltage transformer which is connected to the operating coil of the three element directional relay and hence the relay operates.

If the generator neutral is solidly earthed or grounded, it is possible to protect complete windings, against phase to ground fault.

As neutral is earthed through a resistance to limit the earth fault current, with this type of earthing , it is not possible to protect complete winding from earth-fault and percentage of winding protected, depends upon the value of the neutral earthing resistor and the relay setting. The setting should be such that the protection does not operate for earth faults on EHV side. Earth faults are not likely to occur near the neutral point due to less voltage with reference to earth. It is the usual practice to protect about 80 to 85% of generator winding against earth-faults. The remaining 20 to 15% winding from neutral side is left unprotected by the differential relay. Hence a separate earth fault protection is provided to take care of the complete winding against earth faults. 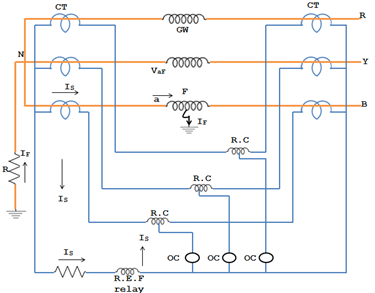 During earth fault in the generator winding (G.W), the fault current IF, flows through a part of the winding and neutral to ground circuit. The corresponding secondary current IS flows through the operating coil (OC) and the restricted earth fault (R.E.F) relay coil of the differential protection shown in the figure above. 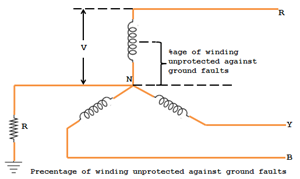