Merz price circulating current principle is commonly used for the protection of power transformer of 5MVA and and above against earth and phase faults. The system as applied to transformers fundamentally the same as that for generators, but with certain complicated features not encountered in the generator protection system. They are explained below;

In a power transformer, currents in the primary and secondary are to be compared. These currents will be different, due to primary and secondary voltages being different. Hence the difference is compensated by different turn’s ratios of CTs. If N is the turn’s ratio of power transformer, then the turns ratio of the CTs on the LV side is made N times of the CTs on the HV side. In this condition, the secondaries of the two CTs will carry identical currents under normal conditions. Consequently, there will not be any differential current flowing thro’ the relay and hence it remains inoperative.

There is usually a phase difference between the primary and secondary current s of a 3-phase power transformer. Even if CTs of proper turns ratio are used, a differential connection for phase difference is effected by appropriate connections for CTs. The CTs on one side if the transformer, are connected in such a way the resultant currents fed into the pilot wires are displaced in phase from the individual phase currents in the same direction as and by an angle equal to the phase shift between the power transformer primary and secondary currents.

In order to make the currents in both side CTs (HV and LV side CTs) in phase, the following rules are followed.

Secondaries of CTs on star connected side of power transformer are connected in delta as shown in the figure below:

Secondary’s of CTs on delta connected side of power transformer are connected is star shown in fig below.

It can be seen that for a delta/star power transformer, the CTs on the delta side should be connected in star and those connected in delta are the ones in the star side. 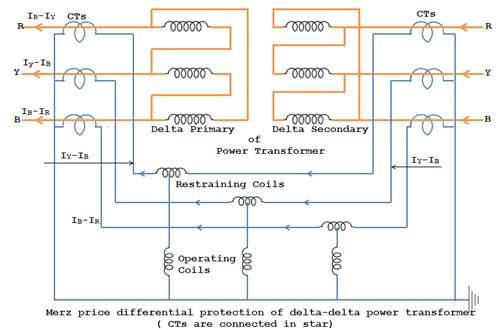 During normal i.e., no-fault conditions, the secondaries of CTs carry identical currents. Therefore the currents entering and leaving the pilot wires at both ends are the same and no current flows through (OC) of the relays. If a ground or phase to phase faults occurs, the currents in the CT secondary’s will no longer be the same and the differential current flowing through the relay circuit will make the breaker on both sides of the power transformer to trip.

This scheme also protection for short circuits between turns on the same phase winding. When a short circuit occurs between the turns, the turn’s ratio of the power transformer is altered and causes unbalance in current transformer pairs. When enough differential current flows through the relay, it acts and clears the fault.