As the field is operated ungrounded, a single fault does not cause any flow of current or affect the operation of the electric generator. However, a single rotor earth fault increases the stress to the ground in the field, when the stator transients induce an extra voltage in the field windings. Thus, the probability of the occurrence of the second ground fault is increased. 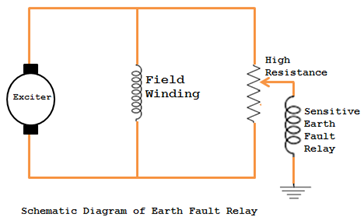 In case, a second ground fault occurs, a part of the field winding is bypassed, thereby increasing the current through the remaining portion of the field winding. This causes an unbalance in the air gap fluxes thereby creating an unbalance in the magnetic forces on opposite sides of the rotor. This unbalancing in magnetic forces makes the rotor shaft eccentric and also causes vibrations.

The rotor windings may be damaged by earth faults. The figure below shows the modern method of rotor earth fault protection. 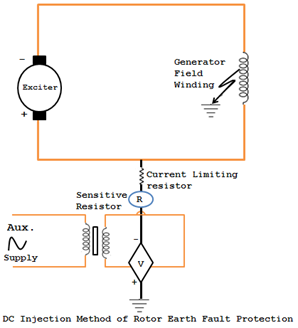 A DC voltage bias is impressed between the field circuit and earth through a polarized moving iron relay. When an earth fault occurs in the field winding, the DC bias causes the current to flow through the relay “R” and it operates, since the circuit is completed through the DC bias relay and the earth fault. It is not necessary to trip the generator, when a single field earth fault occurs, usually an alarm is sounded. Then immediate steps are taken to transfer the load from the faulty generator and shut it down as quickly as possible to avoid further damages.

This type of protection of electric generator is employed for large sets. As it is not practicable to embed thermocouples in rotor winding since the slip ring connections would be complicated, resistance measurement is adopted. The rotor voltage and current are compared by a moving coil relay. The voltage coil of the relay is connected across the slip ring brushes. The current coil is connected across the shunt in the field circuit. The operating coil is voltage coil and the current coil is the restraining coil. The relay measures the ratio V/I=R, which gives the measure of rotor temperature, since the resistance increases with temperature. 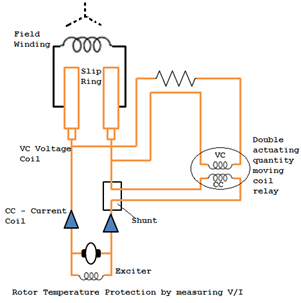 This protection uses MHO relay or off set impedance relay. The figure shows the loss of excitation characteristics. 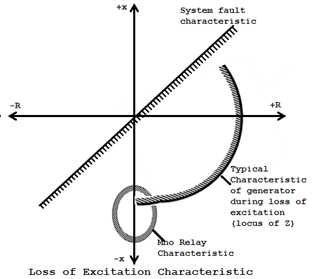 The two distinct effects of loss of excitation are:
Both cause over heating of the rotor.
The loss of excitation can be detected by measuring the reactive component of the stator current. An excessive VAR import indicates the loss of synchronism. The “mal-operation” of the relay due to system transients (which causes momentary reversal of VAR component) is over come by incorporating a time delay of 1 to 5 secs in the tripping sequence of the relay.
An undercurrent relay in the field circuit may also be used except in large generator where the excitation varies widely. But under current relay fails to operate when the field excitation fails. A fast acting under current relay will malfunctioning due to AC induced during synchronizing and external faults.

An alternative solution is to use an offset impedance or Mho relay at the generator terminals. 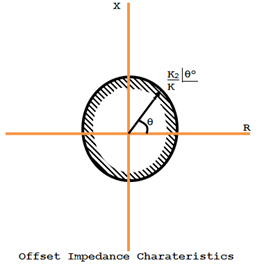 The Mho relay operating characteristic is arranged as shown in the figure (loss of excitation). During extremely low excitation or complete loss of excitation, the equivalent generator impedance falls within the tripping zone of the relay. The above protection scheme is also applicable for protection of rotor open circuit.

The unbalanced 3-phase stator cause double frequency currents induced in the rotor. Consequently, heating of rotor resulting in its damage can occur. Under unbalance conditions, the phase currents have negative sequence components, rotating at synchronous speed in a direction opposite to the direction of rotation of rotor. Therefore, double frequency currents flow is induced in the rotor. 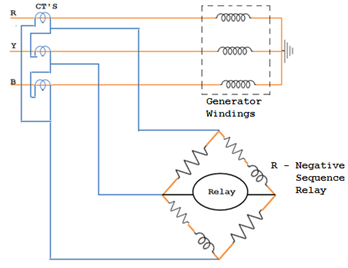 To save the rotor getting heated up under such conditions, Negative sequence Relay is used, which has a characteristic I22t = K or t α (1/I22), where t is the time of operation of relay and I2 is the negative sequence current component and K is a constant, value 7 for turbo-gen set with direct cooling and 60 for salient pole hydro generator set.

The relay will trip the generator main breaker.

Rotor overheating can also be due to unbalanced external fault not cleared quickly, open circuiting in a phase or failure of one phase contact of the circuit breaker.