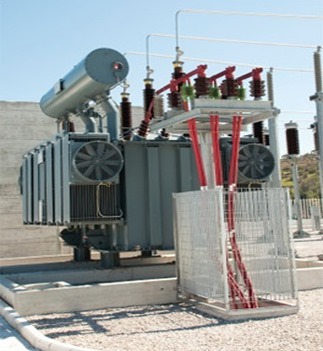 The two major equipments in a  power system are the generators and the power transformers. Faults occur less frequently on these apparatus, than on transmission lines. But the damage caused by the kinds of faults usually takes much more time and money to rectify than are required to rectify the damage done by faults on lines. Rapid reclosing of circuit breakers if feasible in lines and it helps in saving the amount of damage. Gas actuated relay is the simplest form of transformer protection.

A fault in a generator or transformer on the other hand, always needs some attention of the supervisory staff. Fast clearing of faults, however helps in minimizing the damage to the apparatus and also reduces the interruption of power service resulting from reduced voltage and from stability.

Nature of Faults or Causes of Faults in Transformer

Power Transformer being static, totally enclosed and oil immersed develop faults only rarely but consequences of even a rare fault may be serious unless the transformer is quickly disconnected from the system. The faults can be in general divided into three main categories;

Over Load and External Short Circuit

The choice of protection for any given power transformer, depend upon a number of factors such as size, importance and whether it has on-load or off-load tap changer.

Low oil level is a harmful condition, because internal insulation clearance, creepages etc, between leads, bushings and tanks are expected to air. This low oil level could result from: Initial mistake to fill sufficient oil up to the mark. 2. Leakage of the oil through the tank.

During internal faults, below oil level, the heat of arc causes decomposition of oil. The gases formed by decomposition are gathered in the air cushion and the conservator of the transformer. The rate of gas generation depends upon the fault current and arc voltage, The fault may be inter turn fault, earth fault or phase to phase fault. 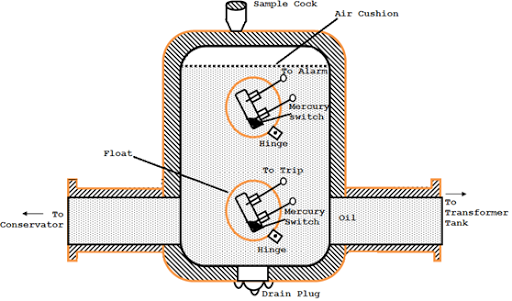 The gases generated by the arc, are used for detecting the above faults. Pressure relief devices and rate of rise of pressure relay, besides gas accumulator relay called buchholz relay are used for the purpose. Of the above devices, buchholz relay is the most important devices which is shown in the figure. Buchholz relay gives an alarm so that the transformer can be disconnected before the incipient fault grows into a serious one.

The relay has two mercury switches, mounted on hinges. The upper mercury switch attached to a hinged flap and the lower switch is fixed on a hinge located in the direct path of the flow of oil from the transformer to the conservator. The upper element closes an alarm circuit, during incipient faults, whereas the lower one is designed to trip the breaker in case of severe faults.

Whenever incipient faults within the transformer occur, they cause the decomposition of some transformer oil in the main tank. The products of decomposition contain more than 70% of Hydrogen gas, which being light, tries to go into the conservator and in the process, gets entrapped in the upper part of the relay chamber. When a pre-determined amount of gas is accumulated, it exerts sufficient pressure to the float to cause it to tilt and close the contacts of the mercury switch attached to it. This completed the alarm circuit to sound an alarm.

If a serious fault occurs in the transformer an enormous amount of gas is generated in the main tank. The oil in the main tank rushes towards the conservator via the buchholz relay and tilts the flap to close the contacts of the lower mercury switch. This completes the trip circuit to open the circuit breaker and protects the transformer.

The following types of faults in transformer can be protected by the buchholz relay and are indicated by alarm as a warning.